For a high load RealTime Processing requirement , Kafka-Spark Streaming combination is an obvious choice today as ingestion-processing pipeline.
Adding an efficient data serialisation like AVRO to this combination can significantly reduce network traffic from Kafka broker to Spark worker to improve bandwidth usage and can ensure faster processing in Spark Executor to improve CPU resources utilisation.
In current project, I recently switched from Json format input data to Avro data for the above stated reasons and can observe much better throughput.
In this post, will explain how to ingest and process binary Avro data in a SparkStreaming-Kafka system along with code sample.

Schema is instantiated as :
Schema.Parser parser = new Schema.Parser();
Schema schema = parser.parse(schemaString); //schemaString is json as described above
The Schema defines the field names and data types. The receiver of Avro data needs to know this Schema one time before starting processing, there are 2 ways for that :

We will cover the relevant 2nd case in detail in this post.
For better understanding of SparkStreaming and Kafka separately, would recommend to go through my earlier posts on Spark Streaming.

There are 2 useful utilities which help in easy and configurable Avro implementation in Spark Streaming. We should definitely get an idea about them first :

Will keep this section concise. Avro Schema needs to be configurable and not statically defined as in last section. This is needed for easy sharing and handling changes in Schema. There is a module named schema-repo on github by LinkedIn which provides a RESTful service to store and retrieve Schemas   : https://github.com/schema-repo/schema-repo
In SparkSreaming, we can fetch the Avro Schema from the REST service using httpclient. I have shared the code, please refer to getLatestSchemaByTopic() method at : https://github.com/cpbaranwal/Avro-SparkStreaming-Kafka/blob/master/src/main/utils/SparkUtilsJava.java
Confluent has also open sourced RESTful interface for storing and retrieving Avro Schema, you can access details at : https://github.com/confluentinc/schema-registry
No matter which library we use, ultimately Avro Schema registry should be configurable to support changes evolving with time.

Now that we have idea of Avro and associated utilities, its time to write the Spark Streaming program to consume and process Avro data from Kafka. For performance reasons, I have used DirectKafka approach with custom offset management using Zookeeper (for details ,refer my last post : http://why-not-learn-something.blogspot.in/2016/08/upgrading-running-spark-streaming.html )
First , we need to include Avro dependencies in pom.xml in addition to Spark and Kafka ones  : https://github.com/cpbaranwal/Avro-SparkStreaming-Kafka/blob/master/pom.xml

Then we need to define a method to get or create DirectKafkaStream .
Important point to note here is that since the values in kafka messages are now binary, so we need to use DefaultDeocder instead of StringDecoder in method signature and Byte class in place of String class for Kafka message values.

The actual method where all the processing of Avro data will happen will be something like below. 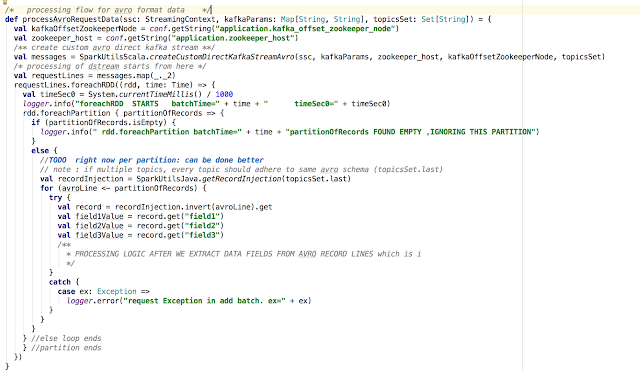 The above processing logic will be executed for each record under each RDD inside a Spark executor.
Its important to note here in code is that for each RDD, Avro Schema is fetched and Injection object is instantiated only once before processing the records in that RDD. Also, the code above assumes that even if multiple topics are there, all topics represent same Avro Schema . 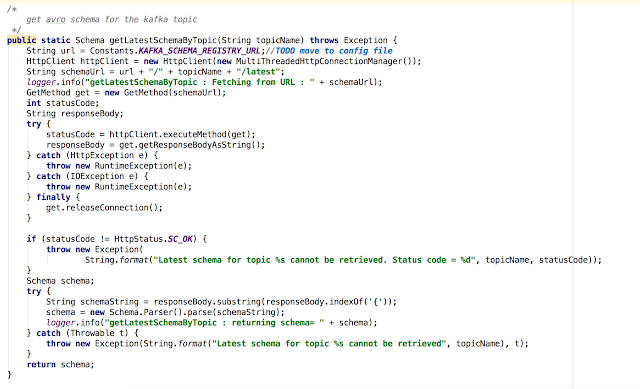 The complete code can be accessed from github repo : https://github.com/cpbaranwal/Avro-SparkStreaming-Kafka

This was all about how to fetch and process Avro data in Spark Streaming using Kafka. One area which i have not covered is how to add Avro Kafka messages on Kafka Producer side. The code for that should be simple on the same line as serializing generic avro data record into binary format .